Available now on Itunes, Bandcamp, CD Baby, Amazon and directly from this website.

From the mind of Jacob Garchik comes an astonishing and astounding testament to the power of reason. A nine part suite for trombone choir, the record features up to eight trombones, two baritones, two sousaphones, and a cameo by a pint-sized-sounding slide trumpet. All of the parts were recorded by Garchik in his Brooklyn home studio.

Jacob Garchik – “The Problem of Suffering” from Search and Restore on Vimeo.

Jacob Garchik – “Creation’s Creation” from Search and Restore on Vimeo.

“I was inspired to create this project out of a deep love for gospel music, and for religious music in general.” says Garchik in the notes. “I knew I had to play it but I wanted to do it on my own terms and in a way that was honest. In my mind, music and religion are both amazing reflections of human creativity.” 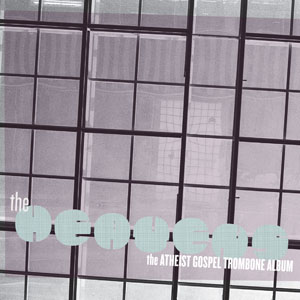 1. Creation’s Creation
What I have done is to show that it is possible for the way the universe began to be determined by the laws of science. In that case, it would not be necessary to appeal to God to decide how the universe began. This doesn’t prove that there is no God, only that God is not necessary.
Stephen Hawking

2. The Problem of Suffering
And Gideon said unto him, Oh my Lord, if the Lord be with us, why then is all this befallen us? and where be all his miracles which our fathers told us of, saying, Did not the Lord bring us up from Egypt? but now the Lord hath forsaken us, and delivered us into the hands of the Midianites.
Judges, 6:13

3. Optimism
In the universe as we see it, life has affected nothing of any astrophysical significance. However, we see only the past, and it is only the past of what is spatially near us that we see in any detail…when we apply our best theories to the future of the stars, and of the galaxies and the universe, we find plenty of scope for life to affect and, in the long run, to dominate everything that happens, just as it now dominates the Earth’s biosphere.
David Deutsch

4. Dialogue With My Great-Grandfather (founder, Sons of Judah Synagogue, Brooklyn)
It was a social club, where he could go and gossip with his friends.
My mom

5. Digression on the History of Jews and Black Music
They [the Jews] have a joy of life that’s cynical, which is basically the same sensibility as the blues sensibility. That’s a greater connection than atrocities…If it [the musical connection between Jews and Blacks] was about suffering and atrocities and all that, the American Indians could outplay everybody.
Stanley Crouch

6. This Song is the Center of the Universe
If the Eiffel Tower were now representing the world’s age, the skin of paint on the pinnacle-knob at its summit would represent man’s share of that age; and anybody would perceive that that skin was what the tower was built for. I reckon they would. I dunno.
Mark Twain

7. The Heavens
When you look at the stars, what do you see?

8. Glory/Infinity/Nothing
Eternal nothingness is fine if you happen to be dressed for it.
Woody Allen

9. Be Good
A man’s ethical behavior should be based effectually on sympathy, education, and social ties; no religious basis is necessary. Man would indeed be in a poor way if he had to be restrained by fear of punishment and hope of reward after death.
Albert Einstein